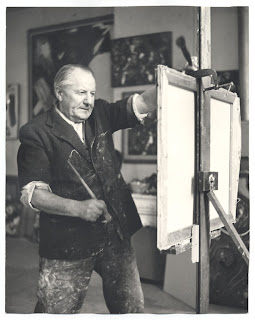 Hans Hofmann (1880-1966) is one of the most important figures of postwar American art. Celebrated for his exuberant, colour-filled canvases, and renowned as an influential teacher for generations of artists—first in his native Germany, then in New York and Provincetown—Hofmann played a pivotal role in the development of Abstract Expressionism. 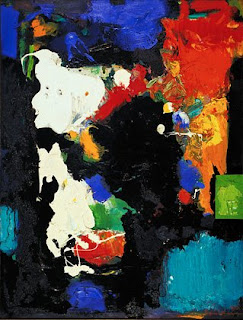 As a teacher he brought to America direct knowledge of the work of a celebrated group of European modernists (prior to World War I he had lived and studied in Paris) and developed his own philosophy of art, which he expressed in essays which are among the most engaging discussions of painting in the twentieth century, including "The Colour Problem in Pure Painting—Its Creative Origin." Hofmann taught art for over four decades; his impressive list of students includes Helen Frankenthaler, Red Grooms, Alfred Jensen, Wolf Kahn, Lee Krasner, Louise Nevelson and Frank Stella. As an artist Hofmann tirelessly explored pictorial structure, spatial tensions and colour relationships. In his earliest portraits done just years into the twentieth century, his interior scenes of the 1940s and his signature canvases of the late 1950s and the early 1960s, Hofmann brought to his paintings what art historian Karen Wilkin has described as a "range from loose accumulations of brushy strokes…to crisply tailored arrangements of rectangles…but that somehow seems less significant than their uniform intensity, their common pounding energy and their consistent physicality." 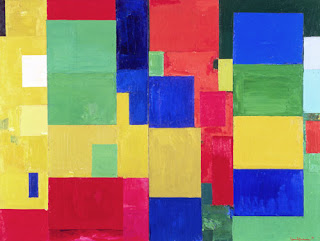 Hofmann was born Johann Georg Hofmann in Weissenberg, in the Bavarian state of Germany in 1880 and raised and educated in Munich. After initial studies in science and mathematics, he began studying art in 1898. With the support of Berlin art patron Phillip Freudenberg, Hofmann was able to move to Paris in 1904, taking classes at both the Académie de la Grande Chaumière (with fellow student Henri Matisse) and the Académie Colarossi. In Paris Hofmann observed and absorbed the innovations of the most adventurous artists of the day including Pablo Picasso, Georges Braque, Robert and Sonia Delaunay, Fernand Léger and Henri Matisse, many of whom he met and became friendly with. Hofmann would remain in Paris until 1914 when the advent of World War I required him to return to Germany. In 1915, unable to enroll in the military due to a respiratory ailment, Hofmann opened an innovative school for art in Munich, where he transmitted what he had learned from the avant-garde in Paris. The school’s reputation spread internationally, especially after the war, attracting students from Europe and the United States, thus beginning what was to be almost a lifetime of teaching for Hofmann. 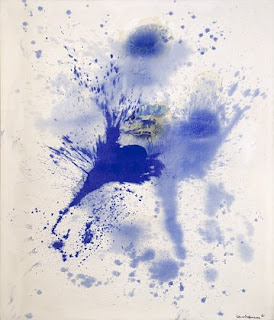 At the invitation of Worth Ryder, one of his former students, Hofmann went to the University of California, Berkeley, to teach in the summer of 1930. He returned to Berkeley the following year, a momentous one which also saw his first American solo exhibition at the Palace of the Legion of Honor in San Francisco. Because of the deteriorating circumstances in pre-war Germany, Hofmann made the decision to remain in the United States permanently (his wife, Maria, would join him in 1939). In 1932 he settled in New York where he again taught art, first at The Art Students League, then, a year later, at his own school (adding in 1935 summer sessions in Provincetown, Massachusetts, where he also lived). For eager young Americans, most of whom had traveled little—constrained in the 1930s by the Depression and in the 1940s by World War II and its aftermath—contact with Hofmann served as an invaluable alternative for direct contact with the European sources of Modernism. By 1960 noted art historian Clement Greenberg called Hofmann "in all probability the most important art teacher of our time." His school would remain a vital presence in the New York art world until 1958 when the seventy-eight year old Hofmann decided to devote himself full-time to painting. 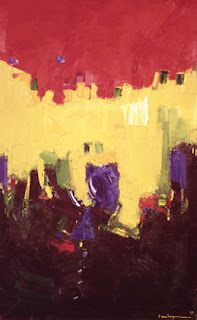 Although Hofmann did not come to the United States until he was over fifty, he is embraced as an American painter and regarded as a key member of the Abstract Expressionists. For all his connections to that movement, and to abstraction itself, his work was nonetheless and by his own admission firmly rooted in the visible world. He combined Cubist structure and intense Fauvist colour into a highly personal visual language with which he endlessly explored pictorial structures and chromatic relationships. Hofmann created volume in his compositions not by rendering or modelling but through contrasts of colour, shape and surface. Beginning in the mid-1940s with a one-person exhibition at Peggy Guggenheim’s The Art of This Century Gallery in New York, Hofmann’s paintings were the subject of exhibitions at major institutions such as the Addison Gallery of American Art, the Whitney Museum of American Art and The Museum of Modern Art. Hofmann was also one of four artists representing the United States at the Venice Biennale in 1960. 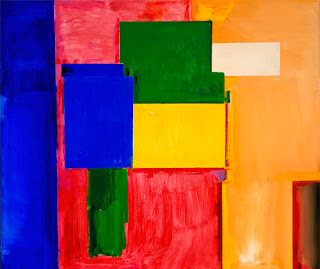 Hofmann was close to 70 years old when, in a dazzling burst of energy he painted most of the large, highly recognizable canvases of the late 1950s and 1960s that assured his reputation. With their stacked, overlapping and floating rectangles and clear, saturated hues, these extraordinary paintings continued up until the end of his remarkable long career what Hofmann had first explored as an artist over six decades earlier. 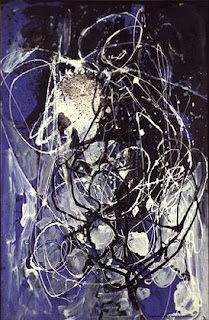 Check out his website and have a play yourself with the idea of creating a painting using the Push and Pull Theory on the website:


Here is an excellent lecture and a must see by Verna Brady about the Push and Pull Theory created by Hans Hofmann:

Great article, thank you fir that!