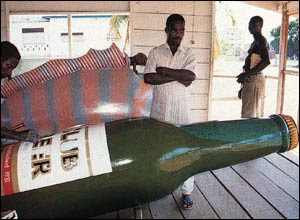 I wonder if the US President Obama had a coffin fitting when visiting Accra, Ghana and more importantly what would he have chosen as the Leader of the Free World?

Even Ghana's director of tourism may have to admit that Accra has its work cut out competing with other tourist destinations in Africa. Yet just outside the capital, is the suburb of Teshi and it is here that tourists are coming to look at a relatively new tradition - the fantasy coffin makers. 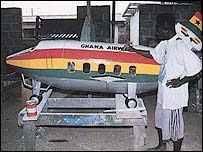 
Drive slowly down the main high street in Teshi, Eastern Accra, and you would probably glance at showrooms and wonder why anyone would want to exhibit a large red fish, or an oversized hammer.

It is as if you have arrived at some strange storage area for a local drama group or even film set. 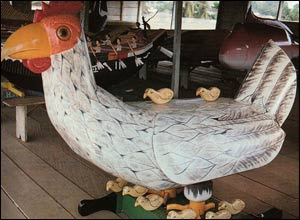 But, further into town, you will see another couple of "film set" workshops, and another, and goodness, is that really an aeroplane?

On closer inspection each of these objects turns out to be a wooden casket highly crafted and lovingly finished to transport the newly deceased on their journey to the afterlife. 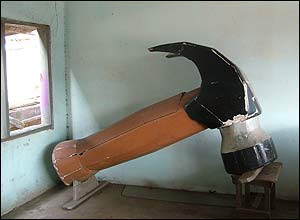 Isaac Adjetey Sowah's showroom in a suburb of Accra has some of the most colourful coffins to be found anywhere. 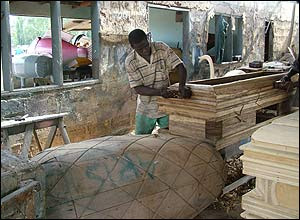 Isaac Adjetey Sowah is the manager of the family business his grandfather started. And at only 22 he has seen it all and he has made it all. Coffins crafted as hammers, fish, cars, mobile phones, hens, roosters, leopards, lions, canoes, cocoa beans and several elephants. 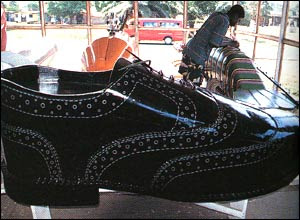 It seems there is nothing Isaac's company would not consider. Mercedes and Cadillacs are very popular he tells me.

But if the designs are fanciful, the business of death is taken very seriously indeed. And the final journey on this earth has to be marked with as much dignity and status as can be mustered.

Isaac would like his own coffin to be shaped like a carpenter's plane
Isaac and his team of carpenters work with many different types of wood in the open-air workshop.

One employee is crafting a cocoa bean, another is chiselling the fine details of a complicated pineapple design.

Many of their clients want to bury loved ones in something that reflects their trade.

Even if that means being buried in a Coca-Cola bottle.

Perhaps surprisingly, this is a new tradition. It has only been around for about 50 years.

The story goes that in the first half of last century one Ata Owoo was well-known for making magnificent chairs to transport the village chief on poles or the shoulders of minions.


When Owoo had finished one particularly elaborate creation, an eagle, a neighbouring chief wanted one too, this time in the shape of a cocoa pod. A major crop in Ghana.

However, the chief next door died before the bean was finished and so it became his coffin.

Then in 1951, the grandmother of one of Owoo's apprentices died.

She had never been in an aeroplane, so he built her one for her funeral.

And a tradition was born.


And what about Isaac's own casket. What would he have?

He had obviously worked this out a long time ago and decided he had made far too many hammers. He was going to have a carpenter's plane.

When I asked Isaac about his most unusual commission his eyes light up and a big grin envelopes his face.

A Bible coffin, starting at around $400, might represent a year's salary for many of Isaac's clients

Now it seems he cannot wait to craft the archangel Gabriel himself.

But for those wanting something more conventional, there is always the Bible coffin which remains a popular design.

Think of a large box in the shape of a leather bound book with the front cover on hinges, and you get the idea.

It is not the most expensive either, although starting at around $400 that could be a year's salary for many of Isaac's clients.

It became a bit of a challenge to guess how each of these coffins actually opens.

To my untrained eye, I had no idea how you would get a body into an enormous snail that would not have looked out of place on the film set of "Dr Dolittle".

Isaac gently explained that the shell came off.

And I felt even more foolish when I had to ask who it was for. A snail seller, of course.

You can buy large fat specimens any day of the week in the market.

One of the most unusual designs was for an Obstetrician whose family felt a uterus coffin would be the ideal resting place for a man who dedicated his life to child birth. 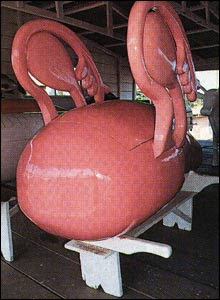 And that enormous biro?

A journalist of course. I was beginning to get the hang of this. But even in death there are often disputes. One part of the family will come along and decide that the canoe another family member ordered, just is not right for uncle Jo. He should have a much larger boat to represent a lifetime as a fisherman, despite the fact that Isaac's team has lovingly crafted an oarsman to row him to eternity. Meanwhile, Uncle Jo lingers in a mortuary for a year or so while the two sides fight it out.
Posted by Unseen Art Scene at 10:07