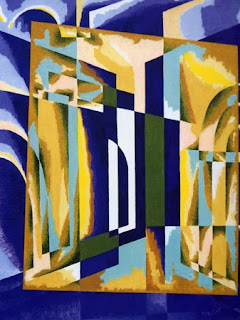 
This is one of series of images that Néjib produced on the theme of Demantlement meaning dismantling the victories gained since Independence. Néjib adored the first President of Tunisia, Habib Bourguiba and he was one of Africa's greatest leaders his successor takes a slightly different approach and this series of paintings reflects that approach.

The home Néjib lived in with Najet, his wife, is full of books, especially revolutionary poetry. If I may be so bold I thought that this painting would go extremely well with a poet that Néjib Belkhodja had an interest in. The poet is from Tunisia and died at the tender age of 23, his name is Abu-l-Qasim Al-Shabbi. His book of poetry, "Songs of Life", has recently been translated into English and I would like to share with you a poem he wrote about Tunisia. I'm sure that this poem sounds much better in Arabic but this is the English version.

I do not weep because night
is a tyrant
nor because destruction reigns
in the countryside.
I weep instead for the heavy calamity
now afflicting us
without relief.
Whenever a leader rises in the country,
vigorous with reform,
yearning to awaken his people,
they garb him in a shirt that curbs his intent.
They stifle his heavenly voice
and murder his music.
Never receptive, they prefer to follow
the ways of tyranny and coercion,
because those are the roads they know.
This is what happens to ones who are sincere!
Death shots are aimed at them easily.
Lo! Calamities have taken hold of us,
they have annihilated our land.


Beautiful Tunisia! I ride the crest of the waves
in my love for you,
My love for you is my covenant -
I have known its bittersweet taste
I'll never yield to the wayward winds
even if I should die,
even if I lose my youth.
I'll never yield, even if they spill
my blood.
The blood of lovers is always game for spilling.
The days, no matter how long,
will show you how true my love is,
will speel out my loyalty in a clear voice.
This is the age of darkness, but I've seen
morning rising behind it.
No matter what time has done to my people's
glory, life will spread your glorious
mantle once again.