Bisi Silva in Central Park during a trip to New York in 2016. “Twenty, 25 years ago, curators of contemporary art might have been completely and totally scared of going to ‘the Dark Continent,’ ” she said. “Now it’s like, ‘Oh, Bisi, I want to go to Lagos, I want to go to Ghana.’ 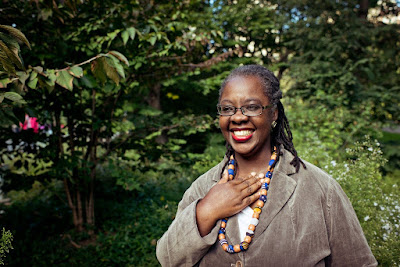 Photo by Gabriela Herman for The New York Times

Article By Richard Sandomir
Bisi Silva, an adventurous curator who, with her own money, founded a nonprofit art gallery and education center in Lagos, Nigeria’s largest city, that has nurtured the growth and recognition of contemporary African artists, died on Feb. 12 in a hospital there. She was 56. Her sister Joke Silva, an actress, said the cause was breast cancer.

Ms. Silva started the Center for Contemporary Art, Lagos in 2007 and made it a hub for bold and experimental sculpture, painting, photography and video and performance art that could ignite local and global interest.

She also curated exhibitions of African art around the world. One, in Helsinki, Finland, in 2011, featured the Nigerian photographer J. D. Okhai Ojeikere’s images of African women’s exotic hairstyles. (She turned that show into a book.) Others showed the work of the Ghanaian-born sculptor El Anatsui in Amsterdam and Johannesburg.

“I wouldn’t call her an African curator, but an international curator,” Hannah O’Leary, the head of modern and contemporary African art at Sotheby’s in London, said in a telephone interview. “She promoted African artists to the world and brought the international art world to Africa, and did it tirelessly. She never did the obvious: Her knowledge and vision were unrivaled.”

Ms. Silva felt that her mission was to change the way contemporary African art was being viewed from a Western perspective and to develop African artists in ways that their schools were not.
“The gaps in the art education system are jarring,” she told Frieze, an art and culture magazine, in 2017. While some West African nations like Nigeria had arts education programs, she called them “a colonial relic out of tune with present-day contextual, stylistic and intellectual realities.”

To fill the gaps, she created the Asiko Art School — actually a series of pop-up schools holding annual, monthlong educational gatherings in various African countries including Senegal, Ghana and Ethiopia, where artists, writers, historians, curators and teachers immersed themselves in seminars, workshops and exhibitions. The events gave Ms. Silva opportunities to evaluate artists’ work.
“Everyone had 15 minutes to present,” Antawan Byrd, who learned art curating under Ms. Silva at C.C.A. and is now assistant curator of photography at the Art Institute of Chicago, said by phone. “She’d be very critical. You had to defend your work and your research.”

Ms. Silva believed that her exhibitions, lectures, workshops, mentoring and educational programs made a positive impact in a short time.

“Twenty, 25 years ago, curators of contemporary art might have been completely and totally scared of going to ‘the Dark Continent,’ ” she told The New York Times in 2016. “Now it’s like, ‘Oh, Bisi, I want to go to Lagos, I want to go to Ghana.’ ”

Olabisi Obafunke Silva was born in Lagos on May 29, 1962. Her father, Chief Emmanuel Afolabi Silva, was a lawyer, and her mother, Charlotte Olamide Williams, was a civil servant with the Nigerian Railway.

After graduating from the University of Dijon in France, where she studied languages, she earned a master’s in curating contemporary art from the Royal College of Art in London. Her thesis examined the marginalization of black artists at exhibitions in England.

Ms. Silva returned to Lagos in 2002, inspired by her research but disappointed that she could not find an outlet for her vision of curating contemporary African art.

“Most of the galleries were commercial, and as far as I knew, there were no nonprofits,” she told Frieze. “Government institutions were moribund, and there was no place for young artists interested in experimenting with media other than painting and sculpture.”

She decided to start C.C.A, becoming its artistic director.

“There is no government funding for such initiatives,” she said in a lecture at the Block Museum of Art at Northwestern University in 2017. “If you want to do something, you have to do it yourself.”
Her cutting-edge shows at C.C.A. included “The Progress of Love,” which explored love through performance work by Jelili Atiku of Nigeria and Wura-Natasha Ogunji of the United States, and installations by Temitayo Ogunbiyi of Nigeria and the United States and Valerie Oka of Ivory Coast; “Identity: An Imagined State,” which looked at African identity in videos by artists from Africa and South America; and “Like a Virgin ... ,” an exploration of women’s bodies, sexuality and identities by Lucy Azubuike, a Nigerian sculptor, and Zanele Muholi, a South African photographer.
“Virgin” was “a divisive show,” Ms. Silva said in an interview in 2017 with Pulse.com, a Ghanaian news website. “There were a lot of objections to Muholi’s photographs of her menstrual blood.”

In addition to Joke Silva, she is survived by two other sisters, Olajumoke Dawodu and Ojuolape Silva; and two brothers, Olabiyi Silva and Bolaji Oladunjoye. She considered her 13 nieces and nephews her children.

Ms. Silva had a particular expertise in organizing photography exhibitions and in creating a library of visual arts at C.C.A.

Oluremi C. Onabanjo, a scholar of African arts, wrote in Aperture magazine after Ms. Silva’s death that her influence on photography “will be writ large, emphasized in bold.”

Citing the vast range of work that radiated from C.C.A., Ms. Onabanjo wrote that “her remarkable vision and indefatigable spirit instigated tectonic shifts in editorial, curatorial and institutional frameworks in Nigeria and across the African continent.”
Posted by Unseen Art Scene at 14:59 2 comments: