CRISIS IN AFRICA by Keilah Wells 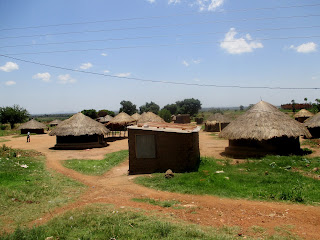 
*NB This is one of the greatest interviews ever. My respect goes out to Mohammed Vall from Al Jazerra. Please listen to this, all you who are interested in Uganda and Global Politricks.


I want to write this out so slowly, quietly because it is means the world to me. We need to look at the systems that have been put into place that are failing the entire international community. When doctors, lawyers and educators become refugees can they enjoy life in a mud hut? What is happening is quite amazing. The camps are turning into settlements soon to become reservations, it is all a matter of semantics and we are watching the development of Africa in a way that is so brutal and cruel. Dictators are using AID to develop their interest and the richer Nations of the UN are being held over a barrel to comply. Who has the right to a swimming pool, a gym and fresh food and water? Who has the right to watch movies in their leisure time and play X-box and eat chips whilst scratching their balls in their off-time? In over 30 years Uganda has had a media blackout. No news has come from this part of the world. The Brits and the Yanks have seen to it that this country of plenty is run by one of the worst Dictators to walk the earth. He has killed, tortured and brutalized his own Nation and the International Community has turned a blind eye to all his antics. The military is just a personal army that murders those that step out of line and ensures the so-called terrorists are dealt with by killing them one by one. This African Leader is shameless, he thinks what he has done was for the benefit of your country. Nothing could be further from the truth.

We have a moral obligation to ensure the rights of all mankind and blah blah blah blah. Let them drink, chilled Champagne! They are worth a million times what is given them...The UN can not skin a deal. Let the businessmen and women in. Let us see this through fairly and justly so all benefit. Bring on the Trumps and the business community to sort out this mess but this is a deal that is going sour. What is at stake is the experiment that is the United Nations. Those that hold serious positions of power in the UN are useless. They can not negotiate, they are fat fools in Savile Row suits unable to work out what to do so they sanction because of their stupidity. They know no better and have a poor privileged up-bringing but there is a deal to be broken here where all can benefit. Welcome to the layer-cake my friends. AID needs to come with partnership of those in Northern Uganda so their land is secured and their benefits realized. No more dealings with Ghost Governments that are a hundred times worse than any Hitler..

Walking so ignorantly into the misery business and understanding nothing. Torture and murder will make the news and therefore feed into the AID Industry. Who is pushing who and where does it stop if at all. The parasites of misery and those that suffer are the innocent whilst those in positions of responsibility lick their lips and smile as the common man lies dying. The camps highlight the exterior more than ever and as they grow into mini cities owned by dictators and their friends. Ugly business conducted by the worse of our humanitarian humans making a mockery of all that is humane. BLOOD IS READ so the journalists here tell me..what an utter bunch of c***s they all are..

The journey into the heart of Africa has taught me one thing. The whole fucking world is absolutely rotten. Those in control want to keep it that way because all those in seats of power are bottom feeding parasites that are totally un-human.

Like a dolphin’s smile but looks can be deceiving.

This mass migration and displacement must be understood with more clarity. To make your life visible those in the regions around the borders of East African countries have no other option but to become refugees otherwise they will stay marginalized, neglected, invisible and completely off the radar. These problems have yet to be fully comprehended, or addressed because to do so will destablize and challenge the entire infrastructure. Those with refugee status are able to become Presidents, to educate and travel abroad. Those on the outskirts are seen as uncivilized savages, bestial creatures without value and this has been designed even manufactured. The issue lies in language, when those in the more affluent parts of the country are told people around the borderlands are no better than squatters, parasitic vermin, insignificant rodents. These are dangerous words that lead to genocide. Man-made famines, war and disease are all that remain for those unregistered masses that live outside the camps, now known as settlements, (like reservations in America) in these regions. What happened this year is set to increase 10 fold in the years to come. The legacy of the continuation of these Colonial Systems are failing the majority and making the indigenous people feel inferior in their own lands.

The Civilization of a Continent via an UN Refugee Program - Every Camp ("Settlement") is designed the same. Just like the Reservations in the United States or Concentration Camps in Europe. Streets A, B, C. Designated Health Facilities, US latrines, primary and secondary schools. A Church and a Mosque. Community Centre. Playing Fields for Sports.

Genocide and Murder in Uganda

President Yoweri Museveni will never step down from power because he is responsible for not just one genocide of 2 million Ugandan citizens but two genocides to date. Mass graves in the region of 4 million plus and the displacement of 2 million fellow Ugandans. Recently, I visited the women's prison in Gulu, Northern Uganda and the prison warden told me the majority of the prison was filled with innocent so-called "squatters" similar terminology as "cockroach", used in Rwanda. The source, Gloria, (not her real name) told me that the female prisoners are willing and happy to work the land for their supper. They are farmed out as cheap labour for any greedy willing farmer wanting to exploit this corrupt society. The President is a disgraceful leader, the worst on the Continent of Africa. He should be facing crimes against humanity in the Hague. He is the most heinous dictator ever and makes Hitler and Stalin look like alter boys in comparison. Uganda must see him leave and answer for his multiple crimes. The main problem being is has been supported by the British and funded by the Americans so he is untouchable.

Somebody is paying to be INVISIBLE - http://www.worldnewsradio.today/.../Dear-CNN-Uganda-is...

Money in a bodybag.