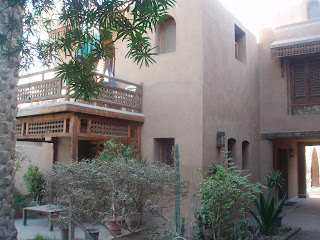 The Ramses Wissa Wassef Art Centre is the home of a unique experiment in tapestry weaving that has produced extraordinary works admired and collected by museums and galleries around the world. The life work of its founder Ramses Wissa Wassef 1911-1974 was dedicated to releasing the innate creativity of young Egyptian villagers freed from the constraints of a formal education.

I had this vague conviction that every human being was born an artist, but that his or her gifts could be brought out only if artistic activity was encouraged from early childhood by way of practising a craft... The creative energy of the average person is being sapped by a conformist system of education and the extension of industrial technology to every sphere of modern life.

Since 1952 two generations of weavers have developed in the Art Centre Ramses Wissa Wassef established with his wife Sophie at Harrania, near Giza. Nine of the original group of children who began working around the age of twelve, many of them now grandparents, are still weaving under the guidance of Sophie Wissa Wassef. A second generation of weavers guided by the Wissa Wassef`s daughters Suzanne and Yoanna, continue to produce wool and cotton tapestries that are remarkable and unique works
of art. 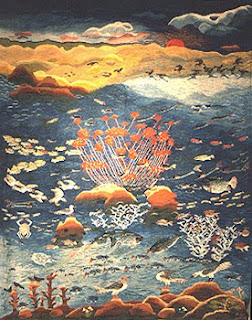 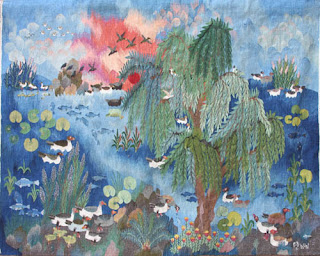 An Experiment in Creativity

In 1941 an Egyptian architect, Ramses Wissa Wassef, was commissioned to design a school in the poor but historic district of Egypt’s capital known as Old Cairo. When the building was finished, he obtained permission for some of the pupils to learn to weave at the end of the school day. Wissa Wassef first mastered the rudiments of this ancient craft himself, then had some primitive looms constructed, engaged a local weaver to teach the children the technique and encouraged them to weave whatever they liked and so began the “experiment in creativity”.

Ramses Wissa Wassef was born and educated in Cairo and completed his architectural training in Paris in the 1930’s. During his time in France he was struck by the ugliness of many contemporary buildings, especially when compared with the beauty of older towns and villages. Back in Egypt, he realised that foreign styles and principles in art and architecture were stifling indigenous forms of expression. This prompted him to immerse himself in periods of history when craftsmen were respected and prosperous members of society and “an astonishing profusion of expessive shapes and objects was created in every sector of life”. He made an exhaustive study of medieval Cairo, then turned to museums of folk art, in order to learn about the activities of craftsmen and analyse the relationship between technique and art.

These studies led Ramses Wissa Wassef to conclude that the distinction between an artist as someone who creates and a craftsman as someone who merely reproduces is prejudicial to creativity. He similarly condemned classifications into major and minor, fine, decorative, and applied arts. Craft, he believed, should be defined as “the individual working of materials to produce a useful and beautiful object”, whether the author earns fame in so doing or remains unknown.

The outcome of Wissa Wassef’s investigations into the role of craft and craftsmen in society was a deepening conviction that “every human being is born an artist but that his gifts could be brought out only if artistic activity was encouraged from early childhood by way of practising a craft.” The architectural commission in Old Cairo gave him an opportunity to test his conviction by enabling children wholly unacquainted with art, craft, or any notion of a distinction between them to express themselves freely through a craft medium.

Ramses Wissa Wassef has described how the children’s technical skills and artistry developed:

At the start the images are very rudimentary; a bird, an animal or a plant are a collection of horizontal,vertical or oblique bars. The body is a single bulk, with a head at one end and a tail at the other. Then a few distinctive features are added, horns and an udder to show that it is a cow, for instance, mere clues to identify it. 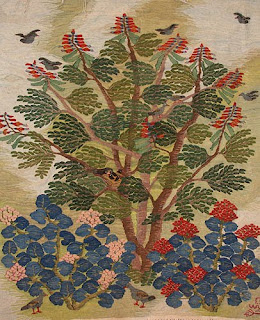 The next stage is to repeat and juxtapose the images. The idea now is to fill up the surface…Animals, birds, plants, houses and people appear, and the whole thing begins to turn into a scene.

Very soon, the young weavers began to link images together, to repeat and juxtapose them so that they formed a scene. Some early compositions were in banks and tiers, reminiscent of ancient Egyptian reliefs. Gradually the details became richer and the shapes more fluid, with obliques and curves.

To ensure that every child’s inspiration sprang entirely from within, fuelled by contact with her or his own environment rather than filtered through an adult’s sensibilities, Wissa Wassef imposed three rules: no preliminary sketches or cartoons, no external aesthetic influences and no critical interference from adults.

Wissa Wassef attached importance to the fact that it took some time to produce an image: this allowed ideas to ripen in the mind and guide the fingers, without loss of spontaneity. He was also confident that experience, gained gradually day by day, would continually give birth to new images.

The Art Centre at Harrania

So promising was the “experiment” in Old Cairo that in 1952, when the original children had left the school, Ramses Wissa Wassef decided to take it further. He and his wife Sophie bought land in the rural village of Harrania, 10 miles from the centre of Cairo. It stands on the edge of a canal, between a cultivated area – alas now largely submerged by urban sprawl – and the western desert, with the pyramids of Giza visible to the north, those of the Old Kingdom necropolis of Saqqara to the south. They built a workshop, made friends with local children and invited any who wished to do so – and whose parents consented – to come once a week and learn to weave. Two of the Old Cairo weavers, Fayek Nicolas and Maryam Hermina, were employed to teach them the rudiments of the craft – and to continue to weave themselves. 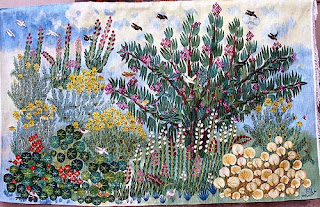 The environment within which the experiment took place embodied its fundamental principles. As in Old Cairo, Ramses Wissa Wassef built the first workshop in vernacular materials. It was large and airy, surmounted by a dome, naturally lit and ventilated. Around it the Wissa Wassefs created a garden, planting oleander, prickly pears, date palms and other ornamental and useful plants – including those needed to produce the dyes used by the weavers.


Over the years, Ramses Wissa Wassef built galleries, houses and additional workshops. He and Sophie lived at the Art Centre from 1964-1967; later, Sophie Wissa Wassef and her two daughters and their families made Harrania their permanent home.

Within this setting, dozens of children from the village learned the craft of tapestry weaving and from it drew much of their thematic material.

About 50 individuals work at the Art Centre today – as high-warp weavers, cotton weavers and batik artists. Six, who started with Ramses back in 1953 and have been guided since his death by Sophie, are known as “the first generation”. All the others work with Suzanne and Yoanne Wissa Wassef and are known as “the second generation”. 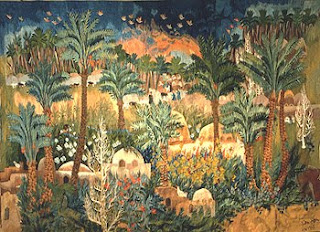 In the 50 years since Ramses Wissa Wassef opened the first workshop at Harrania, some 100 children have mastered craft techniques and used them with extraordinary creativity. They have inspired countless imitators, both within Egypt and abroad: some motivated purely by a wish to make money, some to give skills and employment to others, some to release their own or others’ creativity. In Britain alone, the 1985-1986 exhibition caused a number of artists to change direction, abandoning their former medium and work practice in favour of “spontaneous” weaving.

The artistic achievements of the Art Centre are its greatest, but by no means only, contribution to Egypt and the world. The weavers are the pride of their community. The project has transformed the lives of poor, illiterate villagers, bringing prosperity, education, self-respect and satisfaction to all and high status to the women.

It is, however, for the remarkable results of the experiment in creativity that Ramses Wissa Wassef and the Art Centre that bears his name are and will remain principally renowned. Major exhibitions in Europe and the USA have helped bring these works of art to international attention; in so doing, they have helped the Art Centre to be self-sustaining. Suzanne and Yoanna have proved most able successors to their parents in continuing the work. Many village children are keen to join the Centre and we hope that the experiment in creativity continues to grow.
Posted by Unseen Art Scene at 22:13