Reading the Contemporary: African Art from Theory to the Marketplace 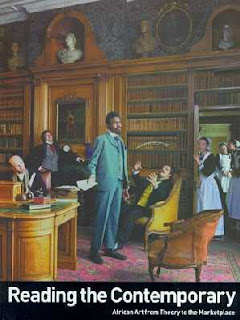 About the Author | Olu Oguibe has taught at the University of London and as the Stuart Golding Professor of African Art at the University of South Florida. He is the author of Uzo Egonu: An African Artist in the West and co-editor of Nka: Journal of Contemporary African Art. Okwui Enwezor is Adjunct Curator of Contemporary Art at the Art Institute of Chicago. He is the Artistic Director of Documenta XI, Kassel, Germany, 2002, and was the Artistic Director of the 1997 Johannesburg Biennial. He is the publisher and founding editor of Nka.

Book Description
In the past decade contemporary African art has been featured in major exhibtions in museums, galleries, international biennials, and other forums. African cinema has established itself on the stage of world cinema, culminating in the Ouagadougou Film Festival. While African art and visual culture have become an integral part of the art history and cultural studies curricula in universities worldwide, critical readings and interpretations have remained difficult to obtain. This pioneering anthology collects twenty key essays in which major critical thinkers, scholars, and artists explore contemporary African visual culture, locating it within current cultural debates and within the context of the continent`s history. The sections of the book are Theory and Cultural Transaction, History, Location and Practice, and Negotiated Identities. Copublished with the Institute of International Visual Arts inIVA, London
Posted by Unseen Art Scene at 14:12