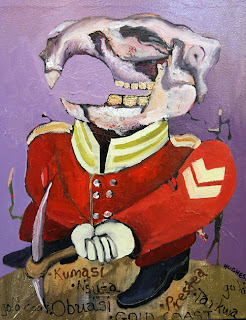 On a cold late January afternoon I became, once again, inspired by contemporary African art and by the same artist that always inspires me, George Kwesi Afedzi Hughes. We had been furiously exchanging passionate words on issues of humanity and the rights of passage and then George drops a bombshell. I opened my email and gasped, “Gold Digger” – This will be the painting that changes everything. The simple tongue-in-cheek look at the hypocritical international art market; this painting drives a wedge straight through the heart of the Establishment. The British Art World – The marketplace of people, ideas and paint; where powerful expressions from the souls of individuals are exchanged for notes of paper. A perverse place in the world were names like Hirst, Herring, Basquiat and Warhol are bought and sold like slaves but their success is envied when it should be despised. When thinking on this subject I cast my mind back to the comments made in the bi-centenary of the abolition of slavery a few years ago. The words were uttered by a marginal proportion of the disengaged youth of Nigeria, Ghana and along the West Coast of Africa. I watched, as a reporter frowned in disbelief, when a few kids spoke out and begged the question, “Why couldn’t you have taken us? We, your brothers and sisters, you left us here! Here in this most brutal of lands of plenty with no chances but for the lucky few. Where cholera, malaria and tropical diseases are rampant; why did you not take us?”

The innocence of youth, call it what you like but know only this, be careful what you wish for. The grass is not always greener on the other side.

George places the focus once again on the authentic use of paint and drives audiences back into a pleasant yet often uncomfortable relationship with art and the artist. As an individual George is best described as infectious, his enthusiasm for his subject is unsurpassed, rarely have I met an artist so dedicated to his craft. His passion for the palette and knowledge of oils and his creation of movement is staggering. On close examination the work could be read as a triptych. The top third of the work has that drunken frustration of Francis Bacon with the strange unorthodox use of the palette, mixing white, red, grey and blue to make pinks, light greys and purples. Seemingly careless rather than carefree, George applies the mixed oils to the canvas creating upside down shadows, dark corridors of sinister loss and deceit around the eyes and brown stained rotten decaying teeth. The head is shaped as a claw-like creature, reminiscent of a sickly JCB reeking of death and grasping at everything it sees and touches. The work resonates. There is no misunderstanding, no confusion of what George’s motivations are when he painted this work: to attack those exploiting his fellow Ghanaians whether internal or external. The Ashanti Goldmines were created and the Government of Ghana were the majority share holders. Recently, they decided to sell 25 % of their share. This was the largest floatation ever organised by any gold mining company. The coordinating and advisory team alone numbered over 200 people. The company was listed on the London Stock Exchange and Ghana Exchange making a few greedy men filthy rich and a country still singing for its supper. These are the ironies of life and Capitalism working at its worst. The rich get richer and the poor stay put. The concern of many inside and outside of Ghana is the new found oil reserves just off the coastline. It is reported to be the largest exploration find in modern history. Is this the shape of things to come? Do the people of Ghana have to drink from this poisoned chalice? Greater value must be placed on the life of an African in Africa and abroad and the continent must begin to recognise that the wealth of Africa is not in its gold, oil and cocoa but more in those like George and their use of oil. Their Art is priceless!

Then onto the second part of this triptych and moving into the area of symbolism and the prominent red coat of the British Army. It is within this section that George mirrors the sentiments of many in Ghana. The tragic situation in which post colonial Britain and their partners are still eking out a grand living from Ghana. Where is their Independence? The country that was first to be liberated from colonialism: the first Independent country of Africa – a country that had Kwame Nkrumah as the first black President of Africa over 50 years ago. Kwame Nkrumah was educated at Lincoln University in Pennsylvania gained power in Ghana in 1957, he was known as “Osaygefa”, “Redeemer”, in the Twi language. One cannot help but to make a comparison in this extraordinary time of change seen around the world with the inauguration of the first black President of the United States. Will Barrack Obama’s fate parallel that of Kwame’s over five decades earlier? Similar to the complicated issues of politics this painting is basic yet complex, multi-layered and there are many concerns being raised within the work; that of the functionality of contemporary African art; art as politics or political art in a time of such interest in politics? What should a work of an artist be? An artist by sheer nature is initially an observer but most importantly a humanitarian, ceasing every chance to make their mark and say their piece; tackling injustice with the brush, rather than the hard-butt of a gun.

The last phase of the triptych is a reflection of the land itself. Coloured orange, brown, green with hints of blue. Scratched into the multi-coloured land are the names of the towns, cities and tribes that are affected by this strange desire for Africa’s riches with greed and treachery coming from all sides. As we are all acutely aware the world is experiencing a financial crisis with its fashionable sound-bite phrase that has been echoing around the world for the past 3 months, “the credit crunch” – this catchphrase could have been created by a copywriter for Mars or Cadburys, the Chocolate Companies with child poverty behind their sweetness. Like so many delicious things in our world where there is pleasure there is pain. The crop is harvested by the sold children of the poorer nations of the region. Those of Mali, Burkina Faso and the Republic of Togo – families who are forced into selling their children to the highest bidder thinking their child will soon send money home from their labour. More often than not they never receive a penny and the cocoa farmer profits, while the multinationals turn a blind eye and this we call Free Trade. Where there is money to be made there is wall-to-wall exploitation. Let us not forget African leaders are the facilitators of this exploitation and are as guilty as those exploiting, one can not work without the other. George has made his position clear in this work by signing his name on the ground. Not amongst the names of those affected, nor in the symbolic military redcoat and nor in the corpse head of the beast within; he places his name on the lower right part of the canvas where the land meet the sky. There you’ll find the word, “Hughes” positioned quietly in black.

There are many ways to interpret this dynamic painting. One can read it as a musical score or the deep sounds that are made from an Ashanti war drum, made of human skin, with the top notes in the air mimicking the sickly colours omnipresent and the base notes hammering the surface of the ground with the reds, oranges and greens. The work vibrates like a large black Ghanaian funeral drum. Held by 3 to 4 men and played with thick batons by men of extreme power and muscle. The use of colour in this work, red juxtaposed by the poisonous purple behind, reads like a majestic drum played solely for Nanas and Kings - a final call to action. This work is brave, ambitious and pulls no punches. It raises important debate about the function of art and the role of the artist.

Something extraordinary and groundbreaking is happening; a great leap of faith, a step in the right direction, away from the norm. This shift in thought and thinking can only serve for the greater good. Regrettably, this change, my cause a chink in the Establishment’s armour but any movement in that direction should be welcomed. Modification of any kind has its victims. In a bold and brave move on the part of the auctioneer, Giles Peppiatt, the long Established London Auction House of Bonhams has generously agreed to celebrate and honour the artists of Africa. The sale is entitled Africa Now! This work, “Gold Digger” by George Kwesi Afedzi Hughes is amongst numerous works of art that can be seen, spoken and written about but most importantly, appreciated, in April Sale 2009 – Africa Now!