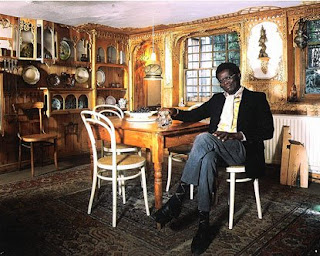 Treasure: Kenyan poet Khadambi Asalache in the Lambeth house that he spent years decorating with wooden friezes and arts and crafts from around the world

AN elaborately-decorated treasure trove of a house in south London is to be saved for the nation.

It was the home of Khadambi Asalache, a Kenyan poet, artist and writer who transformed his unassuming terrace home in Lambeth into a bohemian delight.

When he died aged 71 two years ago, he left it to the National Trust.

Now the trust is to embark on a campaign to raise up to £4million for renovations and future care and wants to know what Londoners think should be done with the property.

However, the influences in his life -- immigration, a sense of loss, and patriotism for both his old and new countries - are reflected in his art and writing and are common to many of us.

"His house is a truly special place which celebrates diversity and through this we are presented with an important opportunity to develop our understanding of contemporary British culture."

Asalache came to London in 1960, where he taught, worked for the BBC African Service and did architecture and landscape gardening as well as writing. He went on to join the civil service at the Treasury. In 1981 he bought his house in Wandsworth Road. To hide the damp, he began to decorate it with fretwork in pine, creating delicate friezes of birds, dancers, flowers and animals.

The fretwork takes its inspiration from Africa, Islam and Britain. The house was also used to display artefacts from around the world which the National Trust described as a "fascinating artistic statement about a multicultural UK".

But it was only after the house was showcased in design magazines that Asalache began to think about what to do with it. Susie Thomson, his partner, said: "Everybody started to say, this is so extraordinary, it must be kept for the future. It is the most beautiful place. I'm really glad it's being taken on."

Ian Wilson, the project manager, said the building was very fragile. "There's some immediate work that needs doing because some of the ceilings have blown."

Elsie Owusu, founder of the Society of Black Architects, said: "The house could be described as an embodiment of the social, political and artistic history of the British colonial experience in the 20th century.

"The fact that it is hidden in an ordinary English city terrace is all the more intriguing."

The National Trust has accepted the gift of the house in principle and committed £1million to it. But it needs to raise up to £4million more if it is to take the property into its care.

KHADAMBI Asalache is one of the "pioneers of modern Kenyan literature in English", according to the Contemporary Africa Database.

His poems were published in literary journals and his best known one, Death Of A Chief, is in the Penguin Book of Modern African Poetry.

His first novel, The Calabash Of Life, about a Kenyan leader who challenges a usurper chief, was published in 1967. It went into 10 editions worldwide and was on the syllabus of many schools in Africa. Asalache also helped to write and produce a section of TV series Danger Man.

In the late Seventies he took an MPhil in philosophy of mathematics at Birkbeck College before working at the Treasury.
Posted by Unseen Art Scene at 09:11