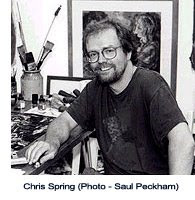 Here is a picture of Chris in his studio in West London. Chris is a writer, curator and artist. He works at the British Museum and is the Curator of the African Rooms. I visited Chris last year at his studio and he spoke about his work and the influence the contemporary African art has had on his works. In 2008, Chris wrote the book Aganza Afrika, which is a comprehensive catalogue of some of the best contemporary African artists from across the globe. 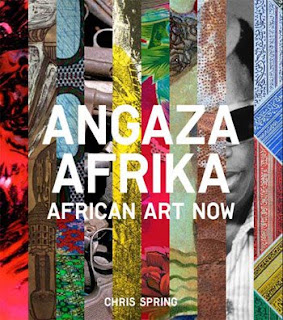 The most obvious influence is found in this work entitled, Atlantic Sounds 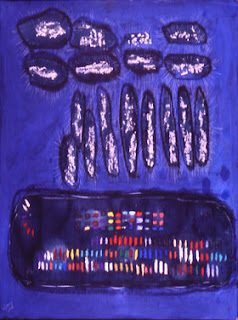 It is all too clear to see how La Bouche du Roi, an installation piece by artist Romuald Hazoumé, influenced the work of Chris Spring. Chris explained just how extremely moved he was by the way in which Romuald simply highlighted the spirits being shipped across the Atlantic with small coloured fetishes. In response to having been a part of this powerful installation at the British Museum, Chris produced his own version with this work, "Atlantic Sounds".

The work is a credit to the Benin artist; it is colourful, vibrant and wonderfully abstract. It is marvellous to see the strong effect each artist is having on the other and portraying mutual admiration for one another.
Posted by Unseen Art Scene at 22:13