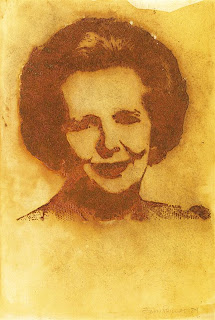 
John Phillips, one of London’s best-known art rebels will be at auction in TAJAN, Paris on the 20th November. (See www.tajan.com)

John Phillips has been the inspiration and support for British and international artists throughout his career. In 1974 he squatted a space in West London - then an area at the centre of London's counterculture. A studio was rapidly established - Paddington Printshop (now the londonPrintstudio). Art school trained - but as a sculptor, not a printmaker, Phillips engaged with local people and the local artist
community, promoting ideas and social action through print and graphic media. The timing was perfect; this was an electifying period of creativity in London's rebel music and street culture. Artists, musicians and local anarchists gathered around John and the studio, as well as local working class communities- many of whom were from the Caribbean. Surrounded by the musical and artistic anarchists of the epoch, the studio became pivotal during the London's Punk era(1976-1981). John worked alongside infamous members of the early punk bands; - the Clash, the Slits, the Sex Pistols, and many others.

Led by Phillips, the studio engaged in a series of bold community campaigns and developments, leading to radical change in the role of art in the community and London's urban lanscape; and radical social change in urban housing and its governance. The subversive use of print-posters, handbills, record cover designs were an important feature of the era, playing a paramount role in instigating 'Anarchy in the UK' particularly within the epicentre of Punk - London. While John Phillips led developments at the studio, he always carried out his own work, which has increasingly been recognised as bold, engaging and original. He has often been seen as the forgotten yet true Punk. Phillips is one of the key artistic voices of London; vibrantly anti-authoritarian, yet sometimes poetic, reaching back to older London radical artistic traditions - inspired by Gilray, Blake and Hogarth.

John's reputation as an artist and master printmaker has developed strongly over the years. His work is consistently challenging and experimental, while being accessible. Now regarded as an iconic figure within the print world, he is both a Master Printer and facilitator of printmaking nationally and internationally. LPS is now supported by the Arts Council of England and is a model for similar resources in the UK and elsewhere. About 400 artists work in the sudio each year every year.

The Iron Lady, 1987 (Lady Margaret Thatcher) is an unusual print with a deliberate and distinctly raw guerrilla flavour. It's also sardonic, juxtaposing an idealised image with experimental and subversive use of materials. Confrontational images featuring ironic technical experiments, were a part of John's work in the late 70’s. His work from that period is still considered extremely edgy. This unique print made
of screen printed iron filings is a fine example of his work. For many years now John has been teaching this and other experimental techniques to artists and is regarded as an inspiration to all who enter his studio. John Phillips' work will be sold at auction at TAJAN, Paris this coming November.


For more information about John Phillips and the London Print Studio |