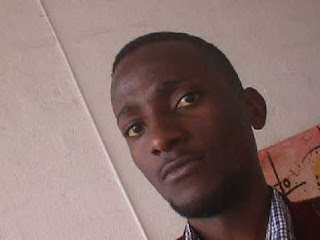 "My interests in art dwell around what is around me. Nature, as well as day-to-day activities of the common man are my major sources of inspiration. I delight in simplicity, and as a result a lot of my work has been linked to naïveté. I however make no apologies for being true to myself."

SANE was discovered in 2003 by Maria Fischer, the owner of Tulifanya Gallery in Kampala, which is the most prestigious gallery in Uganda. Since that time Sane has had regular exhibitions at the Gallery and even participated in several International Exhibitions in the Netherlands, Japan, Germany, Kenya and Tanzania.

He has won several prizes and awards including a joint first prize for the 30 Years of Ugandan Art competition in 2005. 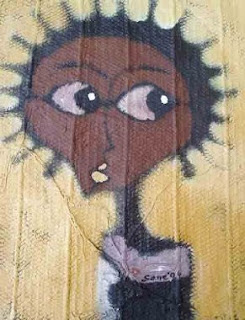 Sane is a painter, illustrator, sculptor and printmaker; born in 1979, in Central Uganda, he began his artistic career in late 1999, as an undergraduate at Makerere University and in 2001 he was awarded a first class degree in Fine Arts. Most recently, the Germany Ministry sponsored him to travel to Bavaria for an exchange programme.

Sane’s work is all about deconstruction and simplifying the natural world around him. In his collages the work, on first sight, seems so primitive with outlines of forest birds and tribal masks but on closer inspection the audiences are amazed at the complexity and depth of the work produced; the multiple linguistic texts dexterously woven onto the canvas and the occasional photograph of a child’s face or a good-looking blonde from somewhere in Scandinavia, are deliberately placed to unsettle the onlooker. So the artist is intelligently toying with his audience, encouraging the viewer to rethink their thoughts on contemporary Uganda and boisterously teasing the observer, whether at home or abroad, with their preconceived ideas of stereotypical Africa. 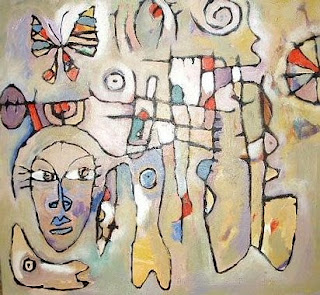 In his paintwork Sane manages to capture a myriad of ideas with one symbol. His extraordinary ability to control the paint whilst his extensive knowledge of the palette allows him to produce astonishing colours in chorus with inventive bubbles made by the paint. His masterly application of paint is quite something to behold. His work is certainly amongst the best being produced in Uganda today.
Posted by Unseen Art Scene at 06:07