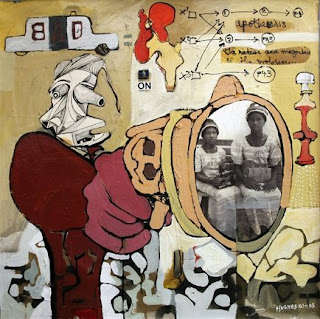 Image: Heritage I by Kwesi Afedzi aka George Hughes

Kwesi Afedzi also known as George Hughes, is one of the leading artists of post independent Ghana. His work unifies modern ideas of Western art alongside West African subject matter. His work is extremely collectable and rapidly becoming an important part of the contemporary art history for both Ghana and also the United States. Afedzi is an art professor at the State University of New York at Buffalo and is amongst but a few artists, originally from Africa enjoying artistic recognition and carving an important place on the culture map. His work acts as a fair cultural trade between Africa and the West and depicts that cultural development is a collaborative effort and a two-way street.

Afedzi left Ghana in his early thirties and his upbringing was completely West African. One can see in his work the transition from one culture to another, which brings out both the positive and negative in either culture. His work speaks for the African living in America and highlights the benefits and pitfalls in both. His work is an important voice that speaks of the need for development in Africa and tradition in America.

In his well-constructed collages of Heritage I and II, Afedzi blends the ideas of contemporary America with the traditions of West Africa. In these particular works the artist is looking at the traditional ceremony of the coming of age in Ghana and merges it with the violence in the United States. The photograph in the works is of Afedzi’s two young female cousins preparing to walk through the streets of Sekondi heralding their manifestation into womanhood and their desire for marriage. This act of parading through the streets of Ghana, in this provocative manner, may not be as trouble-free if translated into inner city streets of America. In these works Afedzi points to the violence in America and questions whether this maybe due to lack of tradition and ritual within a multicultural divided country. He points to the need for mutual respect within the community whether in Africa or the USA. 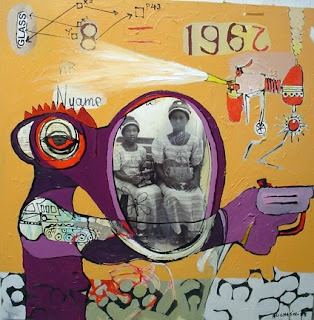 It is transparent that by looking at both cultures simultaneously we can strive to create Utopias throughout the world. Afedzi’s work is vitally important for the change needed throughout the world and this change must start with the idea of mutual respect.
Posted by Unseen Art Scene at 18:06