Shoowa Design from the Kingdom of Kuba 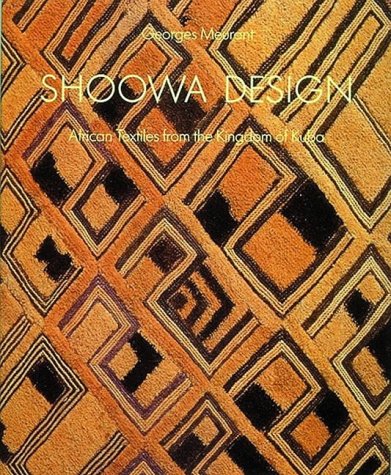 The Shoowa people, a small tribe from the kingdom of Kuba, now Zaire, have been designing and making embroidered textiles for hundreds of years. With their complex geometrical patterning and bold colours, these works of art were used in a variety of ways by the Shoowas, as status symbols, dowries, shrouds, religious vestments or as a type of currency. Genuine production ceased around 1905, with the result that they have become collectors' items. This is a study of these textiles and their history. 100 designs have been selected, photographed and analyzed. Diagrams show each design's development from basic motif to complicated pattern. The history of the Shoowa people is traced and the various influences on their designs, such as prehistoric art are discussed.

Author | fastidious one - Published on Amazon.com


Format: Hardcover
Intriguingly enough, Kuba cloth or raffia is commonly known and typically used when mentioning these textiles. The Kuba people refer to themselves as Bushoong, which the word Kuba is actually a Luba word associated with the ancient Bantu Kingdoms. The SHOOWA people are a very small tribe within the Kuba kingdom, and have not been examined closely by ethnographers, so SHOOWA embroidery are recognized and known by a dwindling few collectors. Kuba design has three stages or cycles;

The Children of Woot: A History of the Kuba Peoples provides astonishing insights into Kuba origins and the cultures. In fact, the number "3" into "1" and particularly, the number "9" are essential symbolic elements weaved and embroidered into these textiles as tattoos and scarifications worn by women --- "9" being a royal (and divisible) number, as well as the number of Woot's children.

Shoowa and Kuba textiles display this numerical and complex encoded geometrical symbology and dynamic language, as well as other ancient symbols of royalty and power. These designs are traced and rooted in prehistoric human history, showing the development from basic geometric motifs to highly complicated patterns. Ironically, the "prehistoric" human continues to prove to have been more advanced, intelligent and civilized than his evolved successor's notions to accept and concede.

European artists such as Gustav Klimt and Henry Matisse were fascinated with these works --- juxtaposing certain textiles which deeply inspired and influenced their own artistic creations. Matisse even displayed them on his walls, and his personal bedroom had many of them. Some affectionately refer to SHOOWA and Kuba textiles as "Matisse cloths." In 1985 alone (around the year of this publication), it is estimated that over 10,000 pieces of embroidery left the Kasai in the course of the past 20 years. The oldest textiles range from early 20th century, and the most recent works shown are from the 1950s and 1960s era.

Although, Georges Meurant appears to be skeptical of the Kuba kingdom's (mythical) origins and the sort, it is high-time and fitting to rightfully accredit these indigenous people beyond the typical primitive labeling... And, this book is a giant step in the right direction!

The Kuba by Bonnie E Weston
Source: The Kingdom of Kuba


The Kuba live in the Lower Kasai region of central Zaire in a rich environment of dense forest and savanna. Organized into a federation of chiefdoms, the almost 200,000 Kuba are a diverse group of over eighteen different peoples unified under the Bushong king. They share a single economy and, to varying degrees, common cultural and historical traditions. Agriculture is the main occupation, supplemented by hunting, fishing, and trading. The name "Kuba" comes from the Luba people to the southeast. The Kuba call themselves "the children of Woot"— after their founding ancestor (Vansina 1964:6;1078:4).

Praised as "God on Earth," the king, nyim, is a divine ruler who controls fertility and communicates with the creator, Mboom. The royal court at Nsheng is a hierarchical complex of councils and titled officials who advise the king and balance his power. Outlying Kuba chiefdoms are largely autonomous, organized on models analogous to those of the capital but on a lesser scale (Vansina 1964:98-99; 1978:216). Kuba society parallels governmental organization in that it is stratified. Yet the Kuba people prize hard work and achievement, and while position of birth may secure advantage, it is not binding (Vansina 1964:188;1968:13,15).

Kuba religion, however, is not highly organized. The creator, Mfcoom, is recognized but is not formally worshiped. More consideration is given to Woot, who led the Kuba migration "up river" and established matrilineal descent, male initiation, and kingship. Local nature spirits, tended by priests and priestesses, are actively involved in people's lives, notably in matters of fertility, health, and hunting. The Kuba have no ancestor cult but do believe in reincarnation (Vansina 1964:9-10).

The outstanding Kuba style diagnostic is geometric patterning used to embellish the surfaces of many objects. These designs are woven into raffia textiles and mats, plaited in walls, executed in shell and bead decoration, and incised on bowls, cups, boxes, pipes, staffs, and other forms including masks. All art forms and designs are laden with symbolic and iconographic meaning, and the same is true of the rich Kuba masquerades.

Masking was first introduced by a woman who carved a face on a calabash, the original model for initiation masks. The invention was taken over by men, incorporated into initiation, and remains a male privilege. Once Bushong boys move into the nkan initiation shelter, they can wear masks and make excursions into the village frightening women and small children. More powerful masks are worn by initiation officials. The masked Kuba dancer is, in every instance, a spirit manifestation (Torday 1910:250; Vansina 1955:140). 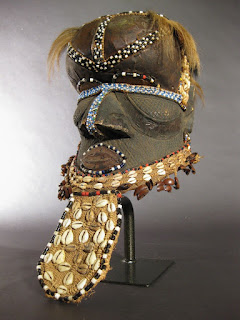 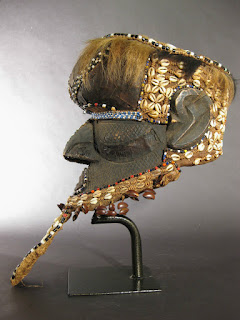 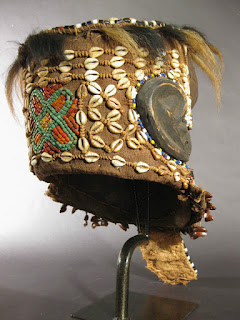 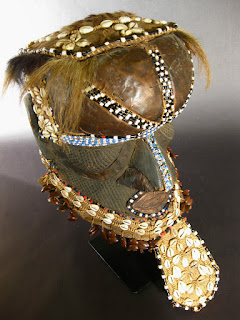 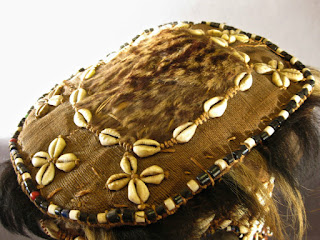 Three royal mask types exist: the tailored Mwaash aMbooy, representing Woot and the king; the wooden face mask, Ngady Mwaash aMbooy, the incestuous sister-wife of Woot; and the wooden helmet mask, Bwoom ,the commoner. These characters appear in a variety of contexts including public ceremonies, rites involving the king, and initiations. Although their dances are generally solo, together the three royal masks reenact Kuba myths of
origin (Cornet 1982:254,256; Roy 1979:170).

Bwoom is a wooden helmet mask elucidated by varied oral traditions. The Kuba feel that one " 'understands' the why of something if one knows how it 'began'; something is known if it is explained" (Vansina 1978:15). Thus Bwoom is the spirit first seen by nkan initiates; he is a hydrocephalic prince, a commoner, a pygmy, or one who opposes the king's authority. Two traditions trace Bwoom's origin to the reign of King Miko mi-Mbul, who had gone mad after killing the children of his precedessor. Although he finally became sane, Miko would lapse into madness each time he wore Mwaash aMbooy, the most important royal mask and until then the only one worn by the king himself. A pygmy offered the king Bwoom as an alternative. Suffering no ill effects with the new mask, Miko accepted it. A less dramatic version is that Miko, known as a great dancer, was simply seduced by the pygmy's creation and adopted it despite its humble character. In both cases the King is credited with improvements to the mask that justify its inclusion in the royal repertoire (Cornet 1982:269).

As inconsistent as they may seem, each account expresses an aspect of the mask or its character. The identification of Bwoom as a pygmy or a hydrocephalic man is often cited to explain the mask's enlarged forehead and broad nose. Bwoom appears in initiation and is always considered a spirit. The lowly origin of the character is reflected in its description: "a person of low standing scarcely worthy of being embodied by the king" (Cornet 1975:
89) and conversely in its defiant performance opposite the regal Mwaash aMbooy. The two may act out a competition for the affections of the one female in the royal mask trio, Ngady mwaash aMbooy (Cornet 1982:255). Mwaash aM-booy's dance is calm and stately, while Bwoom acts with pride and aggression (Cornet 1982:255). The masks are easily differentiated by material, for Bwoom is carved from a single piece of wood and Mwaash aMbooy is made from cloth and raffia textiles.

Bwoom appears on the nkan "initiation fence" of the Bushong (Vansina 1955:150-151) and in other initiation contexts. Little is known of this mask (or indeed most Kuba arts) outside of the royal Nsheng tradition. A royal mask, Bwoom is sometimes worn by the king. Yet unlike Mwaash aMbooy, Bwoom does not appear at funerals, and it is never interred with the king or other dignitaries (Cornet 1982:270). The costume is similar to that of Mwaash aMbooy: heavy with profuse layers of raffia-cloth, bead and cowrie decoration, leopard skins, anklets, armlets, and fresh leaves. Eagle feathers or other prestigious media are added to the crown of the head when the mask is danced.

Despite regional variations, the Bwoom mask conforms to a distinct type. All styles feature strongly rendered proportions dominated by an enlarged brow, broad nose, and usually naturalistic ears. Typical features include the metal work on the forehead, cheeks, and mouth, bands of beads that embellish the face, and an expanse of beadwork at the temples and back of the head. Plate 8 has these plus patterned raffia-cloth covering the top of the
head, with a fringe of hair. The blue beads set into the white band at the temples imitate ethnic tattoo patterns (Cornet 1982:266), and the design at the back of the head is one associated with royalty.
Posted by Unseen Art Scene at 05:07