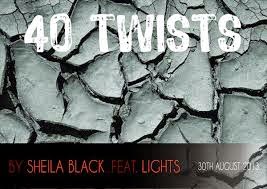 Why does the artist do this? Cover herself in mud...so primitive the artist is in Uganda. So close to nature are the Bugandans and those found in the capital, Kampala. Have they all lost their way? Given up trying....leaving those running to be more like the Europeans well alone, and instead bathing in pools of mud like elephants in salt marshes. Look how the artist plays, like a child in a sandpit. See how happy she is being backward, primitive and honest. Watch her gleeful smiles that encourage the viewers to giggle, courting our attention with her native loveliness. Is the artist wanting to be exotic? I don't think so. Not for one moment as this is well orchestrated art, with an attention to the details. It is constructed with intent and full of positive meaning; some may say we are witnesses to a moment of deconstruction and a going backwards, desperately trying to understanding the past and all that has gone before. A returning to the earth and a break from all protocols, in order to reconstruct the way in which Modern Ugandan art is seen and appreciated. Firstly, at home with those inside the country finding affinities to the work, in order to export out to the wider world, with the approval of the Ugandans over and above all else. These works are the language of African artists and this work is bold, it is Afropunk that makes punk look so last-century. There is an edginess to the images. To the rawness of the ground walked upon by modern Ugandans, a place where all the tarmac has run off and left the country. Where roadworks begin and end too early. Nothing is finished, all is a work in progress. 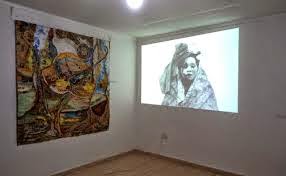 What is this work about and why is of any significance? Let me try and communicate this as clearly as possible. This is the best show on earth. This is a landmark exhibition of black African art. It is so forward thinking it should be shown in years to come. Together, we are standing at the edge of an exciting and novel journey into Art. How shows should be constructed is under discussion and the theory so far, is that they should be created with tenderness, that gently guides the audience through the shows. Each show clearly expressing an overall thought-process of the artist and developing a sense of constructive joined-up thinking. The journey begins at the beginning and we are the observers of a new dawn coming from Guerilla Artists from Uganda. A wave of thinking that may well sweep you off your feet, like a wind sculpture - each show created by this group at @rtpunch Studio are playfully developed and this is intentional to give a sense of inclusion rather than exclusion. To wash away the past and welcome in the future. This sense of artistic generosity is highly infectious. The BA artists are fully aware that contemporary art is not commonplace in Ugandan society. It is yet to be fully appreciated or understood but this milestone exhibition breaks the mould and gives modern Uganda a sense of importance and value.

The background to this story begins with the arts and crafts on the streets of Kampala. The basket-weavers and the paper-twisters are those that are amongst the lowest class of Ugandan society, the ill-educated underclass, whose beautiful and talented works are often overlooked and ignored as trash. This is a best place for our journey to begin... 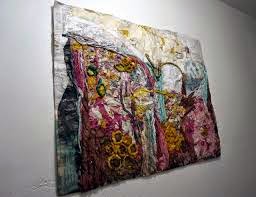 What is important to note is that this Exhibiton takes place in the @rtpunch Studios themselves in the capital, Kampala. The doors to Modern Ugandan Art have been flung wide-open to a fresh audience. A much younger, proactive group of individuals. The upwardly mobile in Uganda. The thinking classes of the country and those that want to empower themselves with an interest in the development of culture from within. This show was solely funded by the pioneer, Wasswa Donald, the artists that spearheaded the @rtpunch Studios over a decade ago. The group have been irritated by being at the mercy of external support and often denied access to funding. Incensed by the comments made by David Adjaye and Simon Njami last year, expressing their opinions that the country was visually not ready to be seen Internationally. The group was so outraged by these bizarre judgements by complete strangers that, that became the challenge: To create a series of shows worthy of export. The group have worked exceedingly hard to push their artistic ideas forward, especially in regards to the ways in which, they want to world to see them, their country and their works of Art. Previously, shows have been exhibited only to the elite, in the Country Clubs or at the European Institutions. These external aspects of Africa, although with good intent, have had a stranglehold over the intellectual Africans for generations. They have been the Patrons of African Culture and quietly cherry-picking acceptable artists to show. 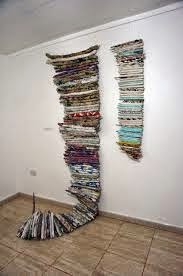 This exhibition marks a sea-change in that thinking. It intelligently interacts with all aspects of Ugandan identity and proudly displays artworks, which reflect the tapestries-makers, paper-twisters and weaves, placing them all under a different light. Magnifying their importance and empathises these distinct elements that make up the National identity. This is a very important contemporary show, that defines the Nation in an open and expressive manner. It heralds in a modern innovative direction. A guide to an original cultural development of Africa and acts as a blueprint for other Nations to follow.

This is the first of it's kind and with the advancement in Social Networking and Social Media delivering important shows from the capitals of African Nations and also exposing to the wider world has never been easier. 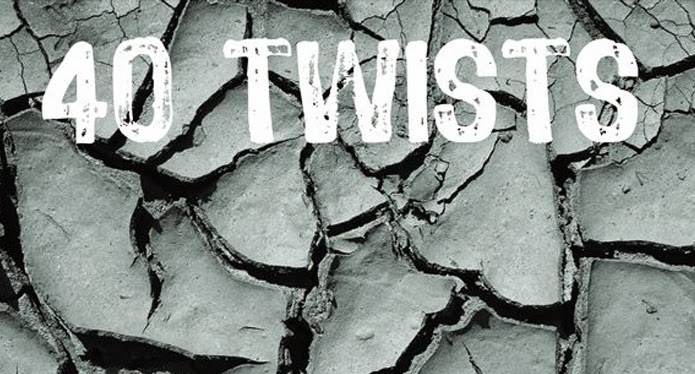 Independence throughout the Continent. It would be a shame to break it up into pieces and have it ignored, silenced, if not censored by Collectors and art-lovers. This is a show of such integrity it should be shown international to encourage inspiration to artists within the Continent. "40 Twists" defines the role of the artist and outlines what is needed in shaping Africa's own cultural development. Hopefully, this show will encourage Museums that focus on Africa today, to take a much closer look in what is shaping up on the Continent itself. This beacon of an Exhibition, "40 Twists" by Sheila Black was housed in the art studios in Kampala and viewed by the world; it is arguably one of the best shows on earth.

Posted by Unseen Art Scene at 10:30 No comments:


October Gallery is pleased to present a new exhibition of works by Naomi Wanjiku Gakunga. This will be her first solo exhibition in London.
Naomi Wanjiku Gakunga (b.1960), grew up among the Kikuyu people of Kenya. She first studied Art and Design at the University of Nairobi, Kenya, before continuing her studies at UCLA, USA. She now lives and works in San Antonio, Texas. Gakunga has displayed works in numerous exhibitions in the USA, France, Brazil and Poland.
The exhibited works are predominantly wall-hanging sculptures ingeniously created from tin cans, steel wire and oxidised sheet metal forms. While the techniques Gakunga uses are common to the fibre arts across many traditions, her chosen materials are not. Corroded sheet metal, rusted tin cans and stainless steel wire all follow the concept ofJua Kali, a Swahili expression literally meaning ‘under the hot sun’ that refers to the idea of chance effects created out of things which have been discarded. Here, nothing goes to waste and waste materials become the medium for a wholly new focus of attention. This perceptive approach to repurposing discarded objects is, today, a highly-developed stratagem often employed by contemporary African artists.
Galvanised sheet metal, known in Swahili as mabati, is ubiquitous in Kenya. Used mainly for roofing materials and walls, this sheet metal is particularly associated with theMabati Women Groups and their empowering community housing projects of the ‘60s. Gakunga observed the success of their efforts, the harvesting of water from the new roofs and the consequent ageing of the material itself. Mirroring these weathering effects in her own artistic process, she deliberately saturates rolls of sheet metal in water, a process that oxidises the submerged surfaces, occasionally adding dyes to create different colours and other more complex effects. Finally, Gakunga selects, cuts and links the resultant pieces to assemble her wall-hangings. These striking sculptures reflect, at one and the same time, both the mabati’s enduring functionality and its fragility; the delicate transformations etched in metal by the corrosive effects of water, chance and time emphasising an ethereal, transient beauty.

Another significant material found in these works is fibre or string. Gakunga’s grandmother was a major influence on her, as the traditional Kikuyu women would weave baskets from fibre extracted from the makongo plant. Gakunga continues to use string and ribbons as primary materials within her work, acknowledging the contemporary in her usage of fine grade metal wires used to sew and crochet her works into organic wholes. Creating pieces that mimic the swaying movements of dancers’ dresses and that exude a light, airy quality, Gakunga notes, ‘String is entwined in the life of a Kikuyu woman, from the moment she is born until she departs.’
This delicate body of work pays tribute to these succeeding generations of women. Gakunga’s choice of materials and the processes of stitching, crocheting and weaving proudly maintain traditions which are here transformed into the field of contemporary art. Using these various metaphors to acknowledge her heritage, Gakunga’s sculptures explore the connections between the past and the present, between tradition and modernity and between the older generations and their contemporary descendants. The effect is both playful and provocative. It is also quite positively transformative.
Posted by Unseen Art Scene at 12:54 No comments:

Source: http://guestprojects.com/gp-africa/re-introducing-oshun/
Re-introducing Oshun
October 7-17 2013
Re-Introducing Oshun, is an interdisciplinary project using photography, film, prose and objects to re-discover black women’s bodies as sacred places of intimacy, sensuality and beauty.
Oshun is a West African Orisha from the Yoruba faith and culture whose role concerns, intimacy, beauty and diplomacy. We will be bringing this deity to life, through the approach of ‘visual rhetoric.’ The intention is for us to have the power, control and ownership to create our own representation.
We are a collective consisting of four female artists from the African Diaspora, led by -
Janine Francois, Creative Producer/Director
Stella Odunlami, Curator
Zainab Adamu, Photographer/Filmmaker
Belinda Zhawi, Writer and Griot.

Posted by Unseen Art Scene at 12:51 No comments: