Only two populations of this South African species are known in the wild.
“This is the most unique and unusual yam I have come across, and probably the most threatened” 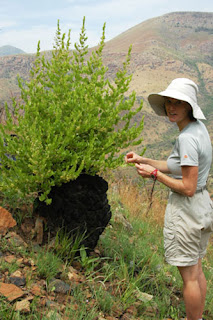 
One of Kew's most striking new recent discoveries is Dioscorea strydomiana - a critically endangered species from South Africa. There are only two populations of about 200 plants known in the wild. This species is regarded as a cancer cure in the region where it grows, and is consequently under threat from over-collection by medicinal plant collectors who cut pieces off the tubers. Dioscorea strydomiana does not look like a typical yam – it is shrub-like in appearance with a huge, slow-growing, lumpy wooden tuber above the ground measuring up to 1m in height and diameter. The tuber sprouts multiple shoots each spring.

The Guardian: http://www.guardian.co.uk/science/2009/dec/22/kew-gardens-new-plant-species
Posted by Unseen Art Scene at 20:17