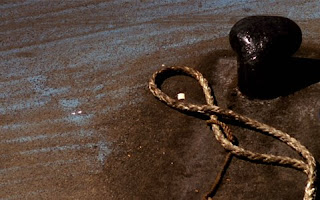 
Since 2006 Zineb Sedira has completed three major film projects - Saphir (2006), MiddleSea (2008) and Floating Coffins (2009), using the sea in each to provide a symbolic as well as an aesthetic context. The first two were initially seen as part of a triptych, yet the latest forms a continuing episode rather than a third element.

In her earlier 2006 film Saphir she examines the Hotel Es Safir in Algiers, built by the French in the 1930s, and the focus of MiddleSea, created in 2008, is the sea joining and dividing Marseilles and Algiers. Both Saphir and MiddleSea employ protagonists who remain unspecific - the films do not tell us their stories, instead they allude respectively to separation and dislocation or departure and journeying. In each the setting remains unnamed and unspecific. Their lyrical power rests in their ellipsoidal quality; they contain references which can be read in so many ways.

Both films will be introduced by acclaimed freelance curator Andrea Schlieker who recently co-curated the British Art Show in which Sedira was a participating artist.

Events are free but to ensure your place please book by email bookings@rivingtonplace.org or telephone 020 7749 1240
Posted by Unseen Art Scene at 12:54