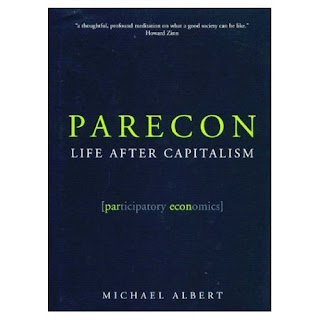 As we saw before the way in which, David Adjaye, the architect plays a vital role in the development of art let us now turn our attention to the ideology of economics and a possible utopian ideal.

I am confident great artwork of the present and future will follow similar lines to what is being expressed in these few interviews with Michael Albert who echoes the thoughts of numerous activists across the globe. Together they have really come up with various possible solutions to global issues.

If the work that is created inside or outside of Africa is more 'Participatory' then the work will being to reflect the thinking of our era on a global basis.

Here is a Youtube interview with Michael Albert talking about his book Parecon: Life After Capitalism.

An economic model for a better world.


Here are some reviews from Amazon:


"Michael Albert is an important thinker who takes us beyond radical denunciations and pretentious "analysis" to a thoughtful, profound meditation on what a good society can be like...." -- Howard Zin. "A program of radical reconstruction, presenting a vision that draws from a rich tradition of thought and practice of the libertarian left and popular movements, but adding novel critical analysis and specific ideas and modes of implementation. It merits close attention, debate, and action." -- Noam Chomsky "... this participatory vision is what Albert successfully provides for activists and academics alike, with the hope that is it will be used to inspire social projects aimed at defeating inequality and leading to people democratically managing their own lives." -- Rob Maguire, ZNet "Albert is ideally suited to synthesizing all the strands running through the anti-capitalist movement." -- The Ecologist "Parecon is a brave argument for ... a much needed...more equitable, democratic, participatory...alternative economic vision." -- Arundhati Roy "He is advocating a top to bottom economic revolution." -- Library Journal "Parecon is a pragmatic and visionary programme that would certainly boost human freedom; we ought at least to try it out." -- Red Pepper "Capitalism not working for you? Michael Albert may be tilting at windmills, but readers are flocking to his book on a system to spread the wealth and work." -- Los Angeles Times "an important contribution to the imaginative tools for everyone who wants to dismantle capitalism." -- International Socialism "A historically informed and logical economic blueprint with the practicality of a hand-tool, and a vision guided by the desire to find nobility in work." -- Kirkus Review

Product Description
'What do you want?' is a query often put to economic and globalization activists decrying poverty, alienation and degradation. In this new work, Albert provides the answer: Participatory Economics, 'Parecon' for short - a new economy and a viable alternative to capitalism.

About the Author
Michael Albert helped found and establish South End Press and Z Magazine, among other institutions. A long-time activist, he now maintains Z's internationally acclaimed web site Znet (www.zmag.org). He has written numerous books and countless articles dealing with, among other topics, economics, vision, social change, strategy, globalization, and war and peace among other topics.